4 Points To Note When Selling Your Home

For most of my working life I have been involved in property in one way or another. When I worked at NBS some of the positions I held included Mortgage Loans Analyst, Marketing Analyst and finally Market Development Manager for home loans. My last assignment at the bank, however, was to put on the market hundreds and hundreds of repossessed properties nationwide that came about as a result of the interest rate spike of 1998 (it went to a staggering 24% for a while!).

I did really well with that, but it was a double edged sword; the more properties we sold, the bigger the loss for the bank and eventually it ended with mass retrenchments and ultimately the absorption of the major loss making NBS into other banking entities. A very sad end to a company that had been in existence for over 100 years and had helped many South Africans build and own their own homes.

So, I know a little about the property market and now in my later years I find myself engaged in this industry once again, this time however as a photographer of homes, either for sale or short term rental. As I fast approach the 500th home shot in the past year I have noticed some things that might help you, the seller, get results a bit quicker, as well as safeguarding yourself against things that could go wrong.

To get the maximum out of your sale the first thing you should do is fix the place up and make it as presentable as you possibly can. Clean it up! If this means that you need to repaint rooms and walls then by all means do it. Bear in mind that this is not a re-decorating exercise, so you should always opt for neutral colours because while you might absolutely love the latest shade of lobster pink from whichever company would make such a colour, prospective buyers might not be as taken with it. In fact they might be turned off entirely. I know I would.

If your garden is in a state get in a team of professionals in to clear out all the overgrown trees and bushes. Trim the verges and repair or replace any loose paving slabs. If you have a swimming pool that has got issues (like its gone green or worse) get a pool company in to sort it out. These things may cost you a little bit of money, but you will recoup this in the selling price because potential buyers will not be as quick to lowball you if they want to make an offer.

There’s nothing that says “money pit” louder than an unkempt property, so to inject a bit of interest from prospective buyers make your place look like it has been loved. In my experience the houses that sold fastest were always the ones that looked like the owners took care of them. Properties that are in a shambles are really hard to sell, unless they meet the old real estate axiom of Location! Location! Location! 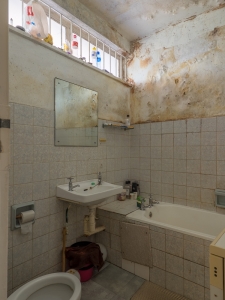 The above properties were put on the market “as is” in 2018. They may still be there if you’re interested.

I can’t stress enough how important this is. Lately it seems that very few people can be bothered to answer their cellphones when I call them to make an appointment to photograph the property they want to sell. This can be infuriating because I know that people don’t go anywhere without their phones these days, so it’s pretty obvious to me that if you’re not answering my call you are ignoring me.

Granted, you may receive a lot of telemarketing intrusions these days, but come on, you’re trying to sell a property, aren’t you? People are going to be calling you about this. If you aren’t taking calls from numbers you don’t know, consider the possibility that these calls may be from other agents who could have seen your listing and may have a buyer for you, even if they don’t have a mandate on your listing. This happens more often than you think. Agents have databases of potential buyers and sometimes an unmandated agent might have a buyer looking for exactly what you’re selling.

The other thing on this point is that if you have opted to use an agency that sends leads directly to you, not answering your phone, or not being available to show a potential buyer the property at a time that is convenient for them (not just you) is going to hurt your chances of success. You have to make the sacrifice of your time if you want to make a sale. Imagine for a moment that you’re buying a car. You walk up to a sales person sitting in a cubicle on the showroom floor to inquire about a model and they say, “Sorry, I’m busy, please come back later.” Will you go back later? It isn’t any different with houses. You have as much responsibility in the sale as the estate agent has, so you have to be available. Always.

Today prospective buyers are seriously spoiled for choice when it comes to finding a home, so if you’re not the warm and inviting type don’t expect them to be clamouring at your door with offers to purchase while you leave voicemail to take your calls. Answer the phone!

A question I am often asked by sellers is whether the For Sale boards used by agents are worth putting up? My answer is yes, they are, provided there is only one of them.

Why only one board? If there are a bunch of different agents who have your property listed and they all have a board on your fence, the first thing that comes to mind to the passer-by is that the property must have been on the market for a while, so there could be something wrong with it, or worse still, it could mean that you are desperate to sell so you open yourself up to lowball offers.

So why not have no board at all then? Well, the For Sale board indicates that the property is for sale. People driving past will see it and even if they aren’t interested for themselves, they may know somebody who is looking for something in the area. An aunt, a cousin, a colleague. When they see the sign go up that could spark interest you may not even have known about. Neighbours can and often do spread the word. They have a vested interest in the area, so typically they would prefer it if somebody they know moves in rather than a potential problem.

Something else to think about in favour of the FS board is that when somebody has made an appointment to come and view your house and your address isn’t quite as easy to find as Google would have you believe (trust me on this one), the board is a marker that they can use to find it. It’s saved me from driving around the block looking for a house to photograph more times than I care to remember. Which reminds me, if you don’t have a number on your house in a prominent position, please put one up so that people know where they are on the road.

This may not be as heavily enforced in South Africa as it is in the western word, but if there is something wrong that you know about, you must tell the agent representing your property otherwise you could be held liable for non-disclosure. Voetstoots doesn’t always cut the mustard anymore in a sales agreement. If a buyer can prove that you deliberately withheld information on a latent defect that is discovered later, you could be liable to cover the repair costs. An example of this might be rising damp in a bedroom, or mould in freshly painted ceiling boards. Not mentioning subsidence could end up really hurting you after the fact.

Never ask the photographer to “Photoshop” over certain things. That’s a biggie. Our job is to try and make your place look as enticing as possible, but for me personally I won’t do lawn replacements or any removing of things that are in the way of a great shot, like say taking out the giant silo in a neighbour’s yard…

Another area that I personally have experience with is failure of a seller to disclose the rights of a sectional title developer to extend a complex by building more units at a later stage. Believe it or not, there is a particular part of the sectional titles act (section 25) that deals specifically with this. If these rights do exist and they are not mentioned in the sale agreement, the buyer has the right to cancel the sale. This can be disastrous for all concerned. In my case I was only made aware of this after the title had transferred to my name. At the time (1996) it was unprecedented as to whether this meant that I could sue the developer and the conveyancer by insisting that the transfer be annulled some 3 years after the fact. What eventually happened is I was given a substantial ex-gratia and “without prejudice” payment by the conveyancing firm for their oversight.

So if you know about things that a buyer needs awareness of, it’s very important to be upfront and honest about them. Don’t let it backfire on you by keeping it hidden.

In the next article I will provide some pointers on how to prepare your home for photography, which is the first thing prospective buyers are going to see.