When I got back from my safaris to Botswana and the Sabi Sands last year I couldn’t focus on much other than organising another safari for as soon as possible. We normally only do our international safaris in September and October, so that meant a pretty long wait, which proved to be a bit more than I could cope with. So I got busy organising a little weekend safari, or “Trail Blaze” in the iMfolozi Wilderness which happened a couple of weekends ago.

Well, I gotta say this; it was an incredible experience. Walking around in the bush never knowing what might be lurking around the next bush is something quite exhilarating, but also being able to share the experience with new found friends was just as special.

I had arranged to meet the participants at my house a month before we went on the trail, just so that I could brief everybody on what to expect, what to bring and what to leave behind. It’s not very often that you can bring together relative strangers and expect things to gel well, but that’s exactly what happened. We had 8 very different people in Andy, Derek, Carol, Pam, Debbie, Leanne, Mel and me all chatting excitedly about the adventure we were going on. I also got to give them a little swag bag with some PR items, courtesy of Olympus who were providing the camera gear we were going to be using on the trip.

The month passed quickly and before we knew it we were off to the iMfolozi Game Reserve, with two new faces, Lynette replaced Andy and Chloe repaced Leanne who couldn’t make it at the last minute. So, 6 gals and 2 guys was the final count for what ultimately became known as “The Daisy Trail” (the naming of which is probably best left for campfire conversation).

According to the published trail literature the drive to Mpila camp in iMfolozi is about 4 hours from Durban, so we set out bright and early on the Friday, aiming to be there by no later than 11am. Turns out that whoever wrote the bit about how long it takes hadn’t driven with Carol or Derek before because we got there at 10:30am and we still found time to stop for breakfast at a Wimpy along the way.

Entering the park was pretty simple, we got our permits and then made the short drive to Mpila camp where we met up with our rangers, Mark and Ayanda. They took us down to what they call “base camp” at a place named Mndinidini on the banks of the iMfolozi river where they proceeded to give us a little briefing on the trail and most importantly, they said, issued us with 2L water bottles, filled to the brim. Now having served in the former SA Defence Force for 2 years, this got my full attention immediately. In those days when the corporals told you to fill up your water bottles you knew something altogether nasty was about to unfold. I hoped that I wasn’t about to relive days of “Saamwerk Koppie” where young white teenage males were exercised to within inches of their lives, along with a 2L water bottle! Fortunately that didn’t happen, but I must admit to experiencing some wariness as I filled in the indemnity form for Mark. 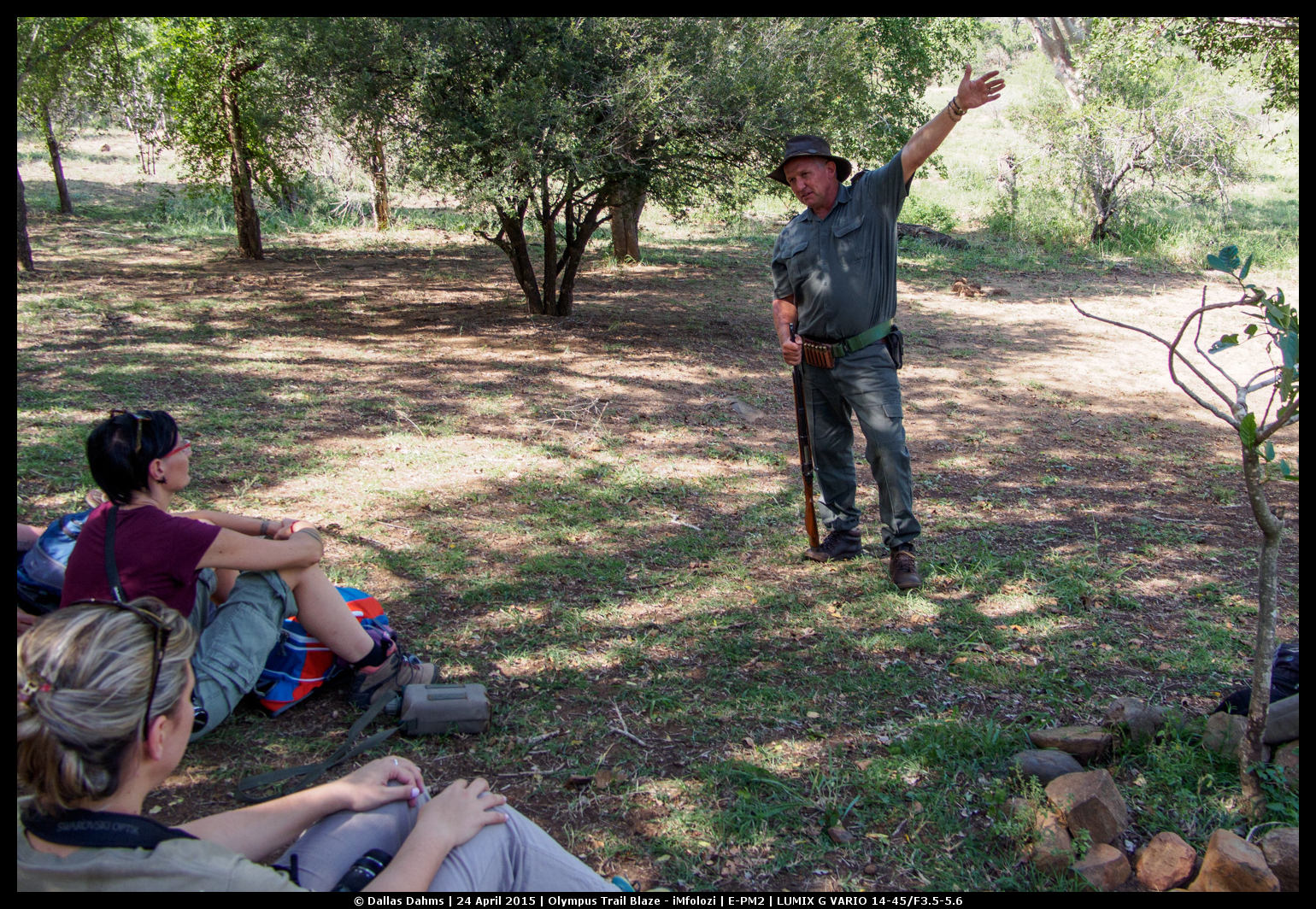 Mark briefs us on the trail

A few minutes later and we were on our way down a short path to the river where it was “shoes off” and ziplock bags on the cameras for the crossing. Mark told us that we were lucky the river level was quite low, barely knee level, because a couple of weeks earlier they were waist deep when crossing over. That could have been interesting, especially considering that we were now in the home of crocs that can grow to over 5m lengths!

With my fully loaded day pack and three other camera bags somehow attached to my back, and my shoes in my one free hand, I put my left foot into the water and felt it slip away under a thick carpet of clay. Instinctively I counter-balanced with my right foot and in the process tore off all the skin on the top of the ball of my foot courtesy of a nearby rock I hadn’t seen while trying to steady myself. Ouch! Not a good start to the trail. Fortunately Chloe had some band aids so once I was on the other side I dried off the wound as best I could, put my socks and shoes back on and marched on into the wilderness. 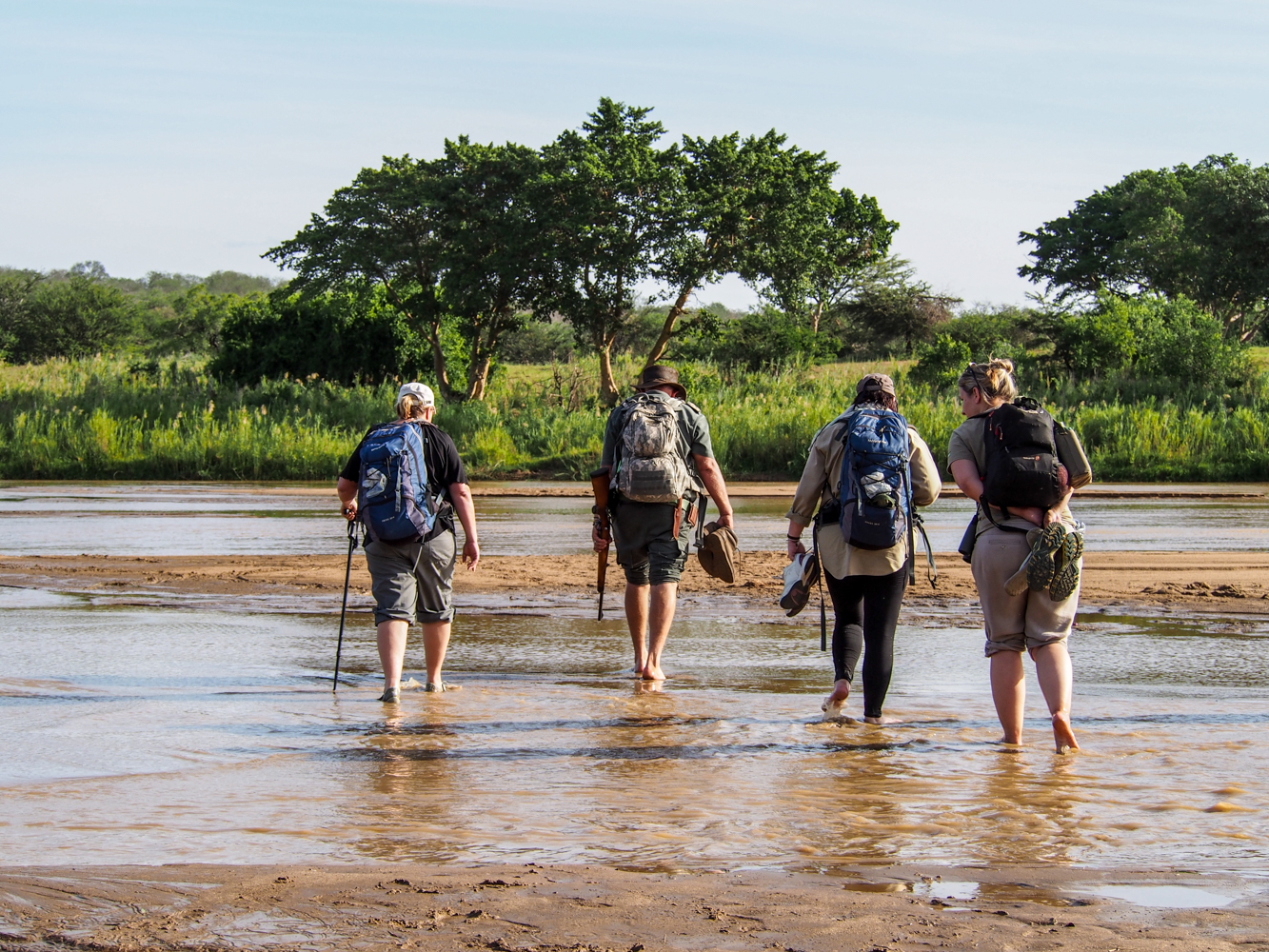 The first animals we came across were a small herd of elephants that we could only hear, thrashing around in the bushes. Every now and then we’d see a monstrous head or butt appear, but they’d disappear again into the bush just as quickly as they’d appeared. Being near wild African elephants on foot is not a good idea, so we took a detour and began making our way towards our satellite camp, some 8kms away.

Now I’m not the unfittest of guys, considering that I do a fairly intense 45 minute kettlebell workout at least three times a week, but with the weight of the stuff I was carrying, plus my injured foot, I found myself struggling a little to keep up with the others. Mark had warned me not to pack too much stuff when we discussed the trail over the phone a few months beforehand and now I saw exactly what he meant. I probably could have left a lot of the things I was carrying behind, although to be fair there was quite a lot of additional weight in my bag with extra camera batteries, accessories and lenses I hadn’t yet given to the others. We also had to get to the satellite camp before dark, so with the detour we were having to take it meant that the pace was a little brisker than usual. Saamwerk koppie, here we come…

One way I had of dealing with the weight was to drink some of the water I was carrying but I didn’t want to find myself without any either since I didn’t know how far we were going. It’s quite different walking in the bush compared to walking in an urban setting, mainly because you can’t really gauge how far you’ve gone unless you have a good view of landmarks on the horizon. On this trail the bush is quite dense, so keeping the view of the horizon isn’t that easy. I just plodded on. 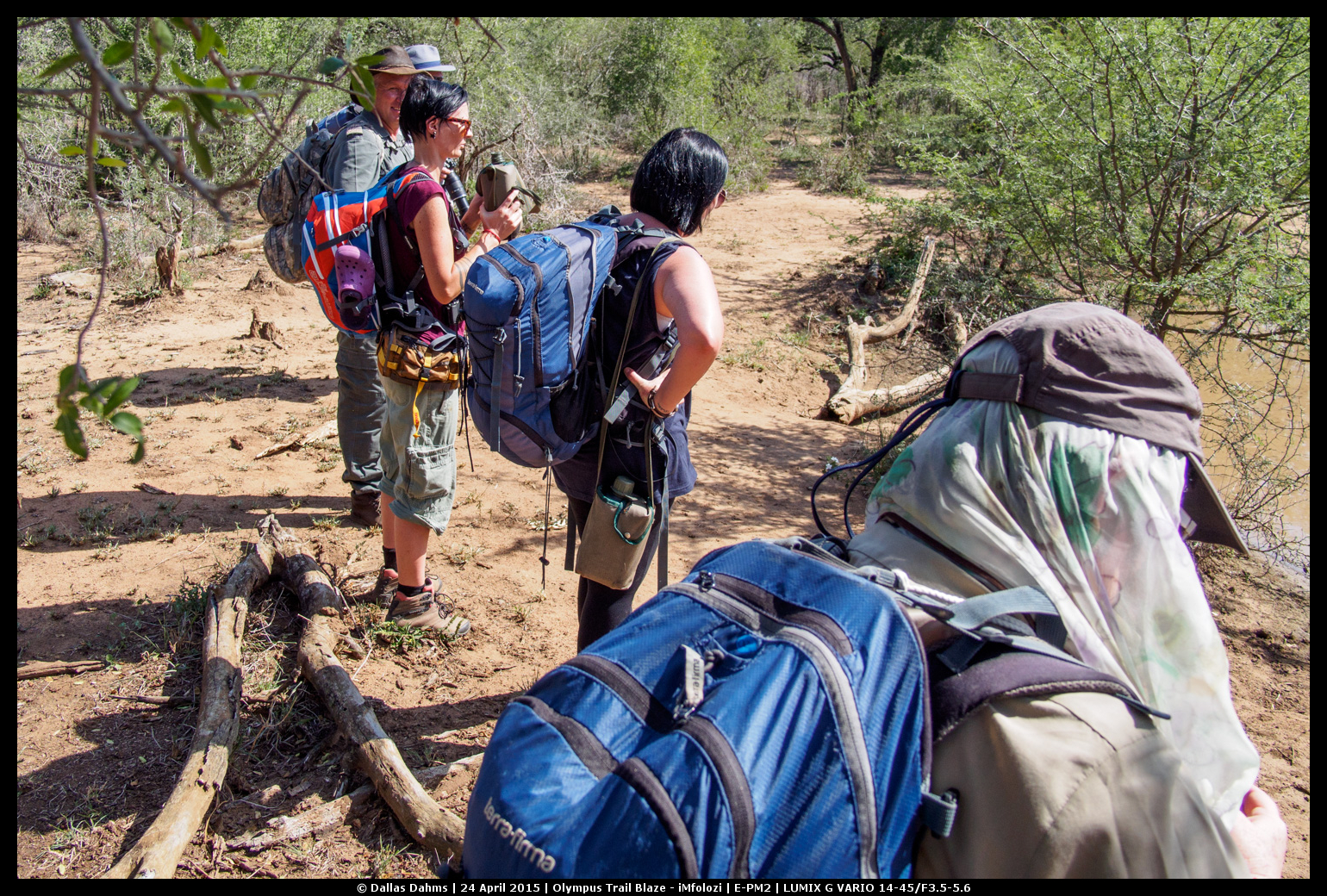 Pausing for water and avoiding the elephants

Eventually after a few hours we came to another river. Well, the same White iMfolozi river, just a different bend of it and it was off with the shoes again so that we could cross to the other side. Taking off my right shoe I could see that the plaster hadn’t stopped the bleeding of my wound. There there was a nasty looking spot of blood seeping through my hiking sock. I’d just have to grin and bear it. At this point we were all pretty tired so we asked Mark how much further we had to go till we got to camp. “About 100 meters from the other side of the river.” he said to much relief from our group!

True to his word and not long after we emerged on the other side of the river, Mark led us to our campsite, surrounded by some lush vegetation that gave it a cool kind of intimacy that we appreciated over the next two days. I will explain the intimacy aspect in a bit.

The satellite camp is made up of four 2 man tents for the guests and 2 other tents for the staff, who apart from Mark and Ayanda included our cook Sipho, who made us some pretty hearty chow during our stay in the wild. There stood an elevated table in the centre of the camp for making tea, coffee and juice. It was elevated, Mark said, so that the hyenas couldn’t reach up to it at night and mess up everything kept on it. Sipho had baked (in the ground in a casserole dish) the most amazing home made cheese bread that we wolfed down while also rehydrating ourselves with some juice concentrate kept on the tall table. 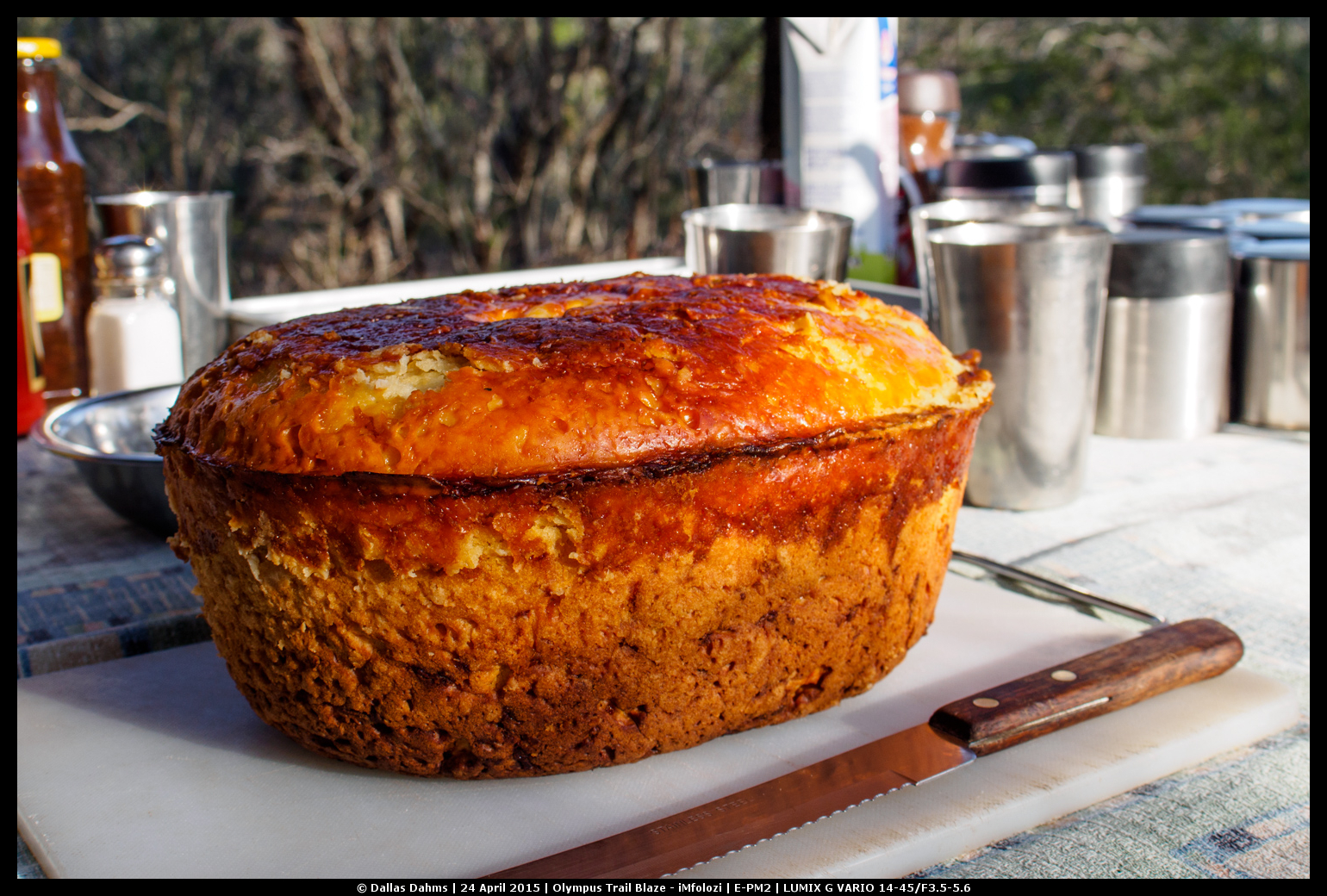 Delicious cheese bread baked in the ground by Sipho 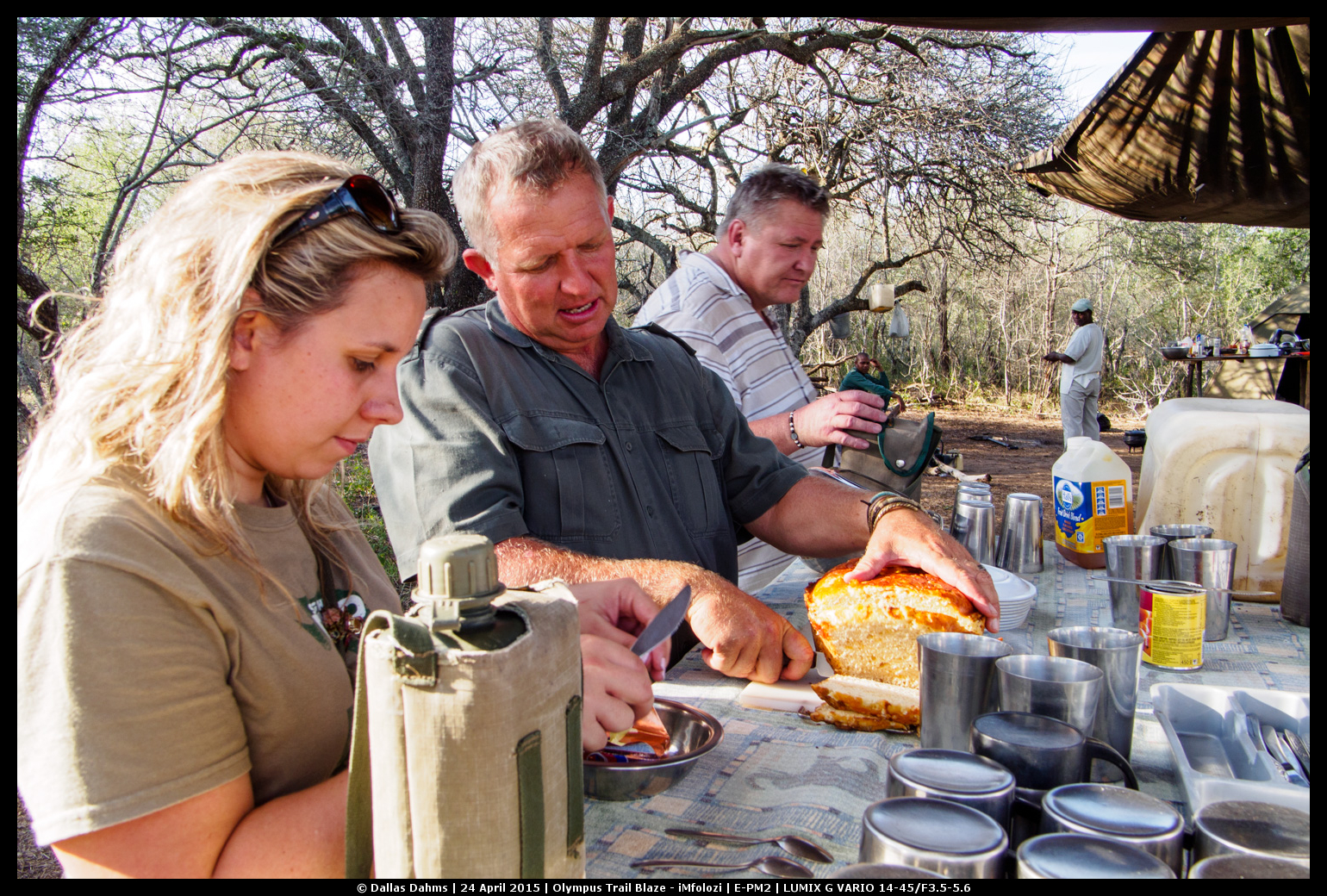 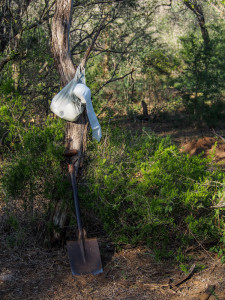 After we dumped our packs and other bits and pieces in our tents, Mark showed us how the camp operates. The first order of business was explaining the “toilet”. Out in the wilderness there is no such thing as a flushing toilet. If you gotta go do a #2 there’s a spade, a roll of toilet paper and some matches in a bag hanging from a tree. You take the bag and spade, walk a little away from the camp, find a spot that no one can see you in (there’s that bush intimacy aspect I mentioned was so cool), check that there are no animals around, dig a hole and do your business.

When you’re done you set fire to the toilet paper you’ve used before you cover up the hole and try to reclaim your sense of evolutionary dignity by pretending that you didn’t just get that primitive. Oh yes, and for the courtesy of the other camp dwellers you mark the spot you used by planting an upright twig in it so that your fresh business doesn’t get exhumed by other campers before it’s had a chance to decompose itself. Well, our 6 ladies were brimming with excitement at the first opportunity to go to the bathroom!

The next thing Mark explained was the shower. This was conveniently located on the other side of the camp, away from the toilet and through a few thorn bushes. Basically it’s a steel bucket with a shower rose and tap attached to the bottom of it, suspended from a branch by a pulley and a chain. Unhook the chain to lower the bucket for filling and then adjust it to the height you like. Warm water you get from Sipho who takes it from a huge cauldron of water boiling next to the kitchen fire. Dilute it with some cooler water and you’re good to go shower! 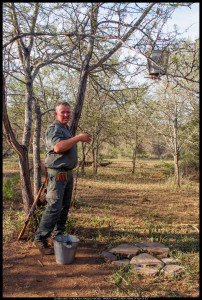 Debbie and Lynette were the first to brave the shower (in their bathing costumes) while the rest of us were left pondering whether or not to add to the little graveyard just beyond the tree with the spade resting against it. That tasty iMfolozi bread does tend to fill you up.

The lounge area in another wing of the campsite was basically a rough circle of bush cushions with some fallen branches used as backrests. This was where we could shoot the breeze and chat about the day’s route march while watching the fire (for which we still needed to gather some wood as a team chore). It was very rustic, but a very welcome place to just chill out and reflect on the afternoon’s hike.

That first night Sipho made us a wonderful spaghetti bolognaise which some of our ladies washed down with red wine they had bought at Mpila camp. As much as I don’t like red wine, in hindsight I should have had some to help me sleep because I lay awake the whole night, listening to hyenas whooping and lions roaring off in the distance. It was quite wonderful to be there in the wilderness, even if sleep didn’t come.